The Unopened Casebook of Sherlock Holmes by John Taylor 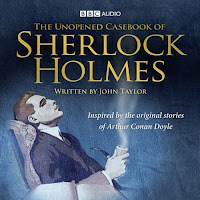 I feel sure that modern writers come to Holmes with a high degree of trepidation, given the intricate knowledge and tenacity to detail of full-blooded Holmsian aficionados, who would sniff out an error or anachronism at the turn of a page. And there is but the finest line between homage and parodie. John Taylor manages, to my ear, to replicate expertly the tone and cadences of Conan Doyle's creations, and these six full-cast productions are very, very pleasing.

Curiously, there is something eerily familiar about all six tales in The Unopened Casebook of Sherlock Holmes. They borrow, ever so slightly, from some of the better-known cases recorded by Dr Watson: there are echoes of more-famous situations and villains in the stories - indeed in the very titles of the cases dramatised: The Wandering Corpse, The Horror in Hanging Wood, The Paddington Witch, The Phantom Organ, The Devil's Tunnel and The Battersea Worm.

Simon Callow makes a wonderfully refined Holmes and Nicky Henson's Watson is the perfect foil - inspired casting. It is such a pleasure to have actors of their calibre and intelligence in popular entertainment like this. Needless to say, the supporting cast are all equally outstanding and illustrate just how valuable is the radio drama output from the BBC. Very little television these days truly matches the sustained judement and talent shown by the writers, producers and actors who contribute to radio programmes.

If you missed it when first broadcast, buy it now - you won't regret it for an instant.