Bunter Does his Best by Frank Richards 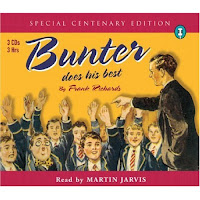 The social milieu of Billy Bunter is now so distant from the experience of the majority of today's readers that perhaps precious few will identify with Billy and his cronies, or with their escapades. Moreover, the hallowed corridors of many of England's public schools echo today with the dissonant gabbling of GIRLS - crikey! And, more often than not, not jolly hockeysticks sorts of girls at that. So, even twenty-first-century Bunters are going to find Greyfriars an odd kind of place - full of bizarrely named coves up to all sorts of puerile japes - and definitely not the kinds of things they would find themselves doing at all.

None the less, young Jarvis is simply masterful in his depiction of boys, beaks and masters, and puts on a thrashingly good show. Three cheers for Martin Jarvis.

The curiously asexual world of Frank Richards and his schoolboy creations makes entertaining listening - and will bring back, no doubt, for many, memories of old (some of them painful and in groups of six). The audience for Bunter must be, I guess, the grandfathers and perhaps even the fathers of today's schoolchildren, but I wonder whether the Fat Owl of the Remove is going to enjoy the same popularity as his more middle-class brothers William Brown and the Outlaws. And whatever happened to Jennings?