The Killing Woods by Lucy Christopher 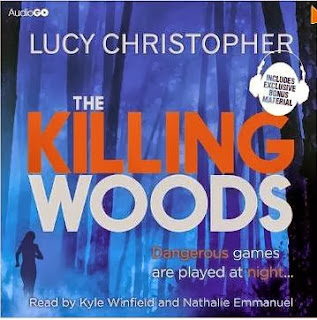 The Killing Woods is a stunning piece of work that is spectacular on the page – spare, economical, raw – and dramatically vivid and real as an audiobook, performed in spine-tingling style by the very talented Kyle Winfield, Nathalie Emmanuel  and Katie Sobey.

Ideally, you want to have both media: to be able to see the text on the page and then to hear it brought to life by the actors.

Emily’s Dad comes into the house from the wood – Darkwood – and there is something draped across his outstretched arms.

‘It wasn’t a deer Dad was carrying. It was a girl…Dad had done things like this when he’d been a soldier who saved people; maybe he was being a hero again. Then I saw that this girl’s skin was grey, blue around the lips like smudged lipstick. Her long hair was plastered across her face, dark from the rain. I saw her green short-sleeved shirt and the silver bangle on her arm. I wanted to sweep the wet hair from her face, but my hand was half-raised when I stopped myself. I recognised her. I knew this girl.’

Ashlee Parker is dead. And Emily’s Dad, a former soldier suffering post traumatic stress disorder following the death of a civilian during a military mission, is number one suspect: after all, he is the one who found her; he is the one making sketches of a deer amidst the trees, with Ashlee’s face; he is the one in the abandoned Second World War bunker deep in Darkwood.

But Emily’s Dad isn’t the only one who can’t remember what happened that night in the woods, whose secret Game is a deeply denied and buried memory. Damon, the murdered girl’s boyfriend, wakes up after a crazy night filled with ‘fairy dust’, and he cannot recall the details of how he got where he is; cannot find the dead girl’s collar – thin, shiny and pink ; cannot find her phone.

Emily, Damon and finally Ashlee narrate the circumstances and consequences of Ashlee’s death in a bravura performance brim-full of threat, realisation and regret. The ending is truly startling and unexpected.

The Killing Woods is exciting, dramatic and poignant. And though aimed perhaps at the young-adult market this book will earn plaudits from anyone taking the time to listen.